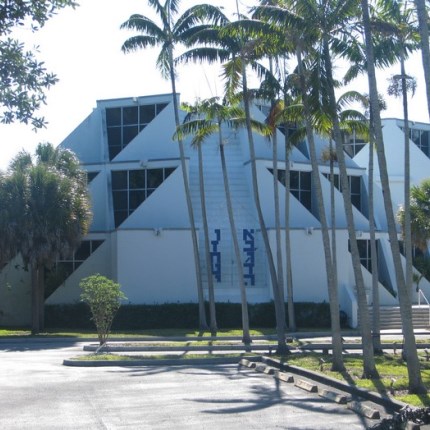 Mas’ purchased includes the synagogue at 9408 Southwest 87th Avenue, which has operated for more than 30 years under the Bet Breira/Samu El Or Olom Jewish organization, plus about 4.45 acres of land.

The building’s architecture is iconic in the neighborhood. Designed by Charles Sieger of Sieger Suarez Architects in the 1980s, the temple is laid out in a three-tiered triangle with large windows on each floor.

Records show the buyer as Galloway Road Partners, an entity led by Mas.

In the meantime, Silverstein said, the new owner has leased the building to the Dor Chadash congregation, as well as the Rosemont Academy, a school for children, for “the next couple of years.”

The Kendall synagogue joins a growing number of South Florida’s religious properties purchased by developers. In Bal Harbour, the Church by the Sea sold its land to the Whitman family for $30 million for an expansion of the Bal Harbour Shops. And Miami’s First Church of Christ Scientist will likely have a condo tower built above it by the Fifteen Group.

Mas is the former CEO of the Neff Corp., one of the nation’s largest rental companies for construction equipment and tools. He stepped down from his position shortly before Neff was bought out by Lightyear Capital in 2007 for $900 million, according to published reports.

He’s currently chairman of the Mas Group, an investment firm with interests in industries like real estate and healthcare.