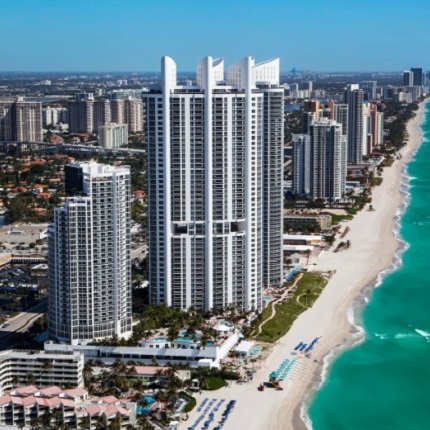 Industry experts say Miami’s hotel market could be reaching its peak in 2016 as revenues and occupancy rates begin to level out.

Last year was solid for the individual hotels that make up Miami’s leisure industry: more than 44 million travelers passed through the Miami International Airport, a bevy of new hotel developments opened their doors and room rates saw steady gains compared to 2014.

Occupancy rates hovered around 78 percent, mostly flat from the previous year, and hotel owners’ average revenue per room grew to nearly $153 — about a 6 percent jump, according to year-end data from STR.

“On one hand there’s a story about what’s going on at the property level, and then there’s a separate story about how buyers and sellers and lenders are acting right now and how the transaction market has been,” Max Comess of brokerage HFF told The Real Deal. “The stories have been a little disconnected. Turmoil in global markets has started to put a damper on activity from certain investment groups and lenders as their strategies become more cautious. Plunging stock markets hurt real estate investment trusts in particular whose share prices “fell precipitously” compared to the highs seen earlier in 2015.”

Miami hotel occupancy dating back to 2009

One example of that early-year bravado was the $278 million sale of the former James Royal Palm in South Beach to the Chesapeake Lodging Trust. That closing came in February, which also saw the $230 million sale of the Miami Beach EDITION to the Abu Dhabi Investment Authority.

“The REITs for the most part have exited the market,” Comess said. “They were really driving South Beach, downtown Miami; a lot of the resort markets throughout the state. Another factor playing into the market right now is a strong U.S. dollar shrinking the appetite of foreign travelers and investors.”

Less purchasing power for tourists abroad roughly equates to fewer hotel rooms booked. South American countries in particular are facing harrowing economic conditions, which Comess said is troubling because Miami is such a hub for that continent. However, Comess said these trouble spots don’t mean Miami’s hotel sector is in bad health. If anything, it’s “bouncing off the top” as it starts aging into its golden years.

Wendy Kallergis, president and CEO of the Greater Miami and the Beaches Hotel Association, would agree.

“It’s going to even out because we had so much growth in 2015,” Kallergis told TRD.  “Hotels this year got a slow start at least partially because the northern states enjoyed warmer holidays than usual.”

But she expects business to return to normal during the spring, especially with big-ticket events like the annual Ultra Music Festival bringing in travelers. She also said occupancy leveling out is a byproduct of more hotels opening their doors as opposed to a decrease in demand. Miami Beach alone saw the opening of the Edition, Faena Hotel, Nautilus, Aloft, Hyatt Centric, Hampton Inn Miami South Beach and 1 Hotel South beach, altogether bringing just under 2,000 rooms online in a single year.

That trend will likely continue as the EAST Hotel at Brickell City Centre, Langford Miami in the downtown area and the Surfside Residence Inn all open this year. And while the market maturing usually means a return to stability, the year will not be without its trials, experts say.

“We expect this year to be challenging. The Miami Beach Convention Center is closed; several hotels are already reporting that this is leading to a loss of business,” Paul Weimer, vice president of brokerage CBRE’s hotel division, said in a statement to TRD. [The convention center is not fully closed as events like Art Basel will still take place there, but it is taking no new reservations while renovations are underway.] “The dollar has remained strong, making it more expensive for international travelers. Many of our feeder markets continue to experience economic issues… I think we will be very lucky if RevPar ends unchanged year over year.”